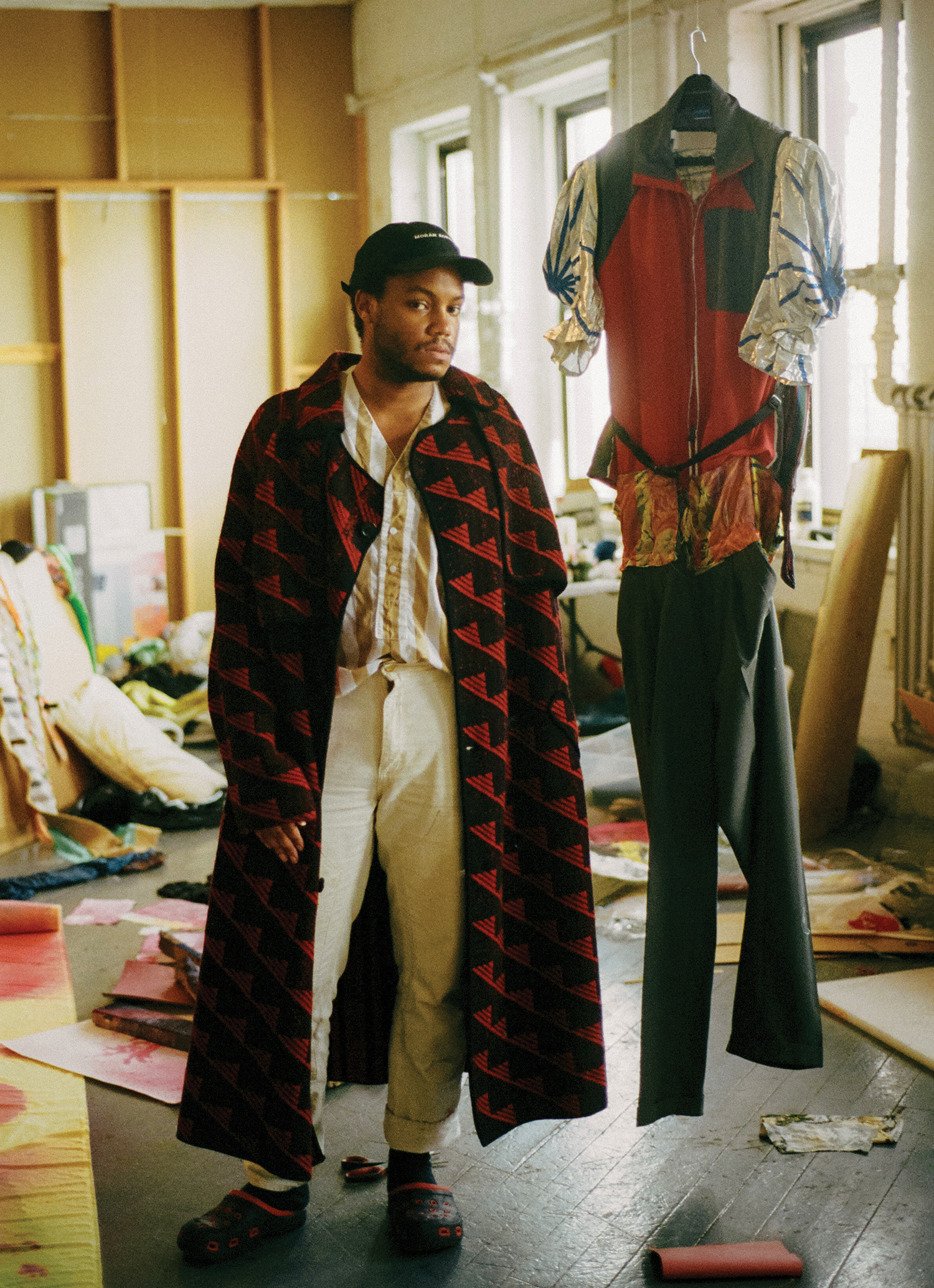 Eric N. Mack’s future as an artist was decided at birth, when his mom Lisa Scott and his dad Miller Mack honoured him with the middle name National, after Washington D.C.’s National Gallery of Art. It was there, in the 80’s, that his parents met while his dad worked at the gallery as a plexiglass specialist, building and maintaining the vitrines. A young Eric often went along for the ride, getting to know works by artists such as Vincent Van Gogh in the process. Admittedly, he wanted to “study everything” in order to allow himself to naturally grow inclined to whatever felt right. Eventually he chose to major in sculpture and painting at Yale University School of Art – an institution that artists such as Brice Marden, Chuck Close, and Richard Serra attended, and all of whom Mack admires greatly. He is also a huge fan of Robert Rauschenberg and had the pleasure of working in the late artist’s studio in Florida earlier this year.

Like Rauschenberg, Mack’s own works toy with context and ideas of re-use in order to create new forms – large-scale works that he calls paintings. Constructed from a patchwork of materials and surfaces that push silk, frill, or even an old t-shirt, into new frontiers, Mack forgoes painting’s rectilinear relationship with canvas for infinite new possibilities of presentation. Inspiration comes from his adopted city of New York, which he’s lived in for over a decade, as well as fashion – his dad once owned a clothing store – and art history – a recent fascination is the 1970s French art group Supports/Surfaces. He also places great emphasis on building knowledge.

Beneath the draping, swooping and layering of the surfaces that shape Mack’s canvases, is a melting pot of art academia and consideration for the important contributions of artists who came before him. Even in his spare time, he’s never not looking to build upon his own awareness of New York’s art legacy. Below, he let’s us pick his brain. 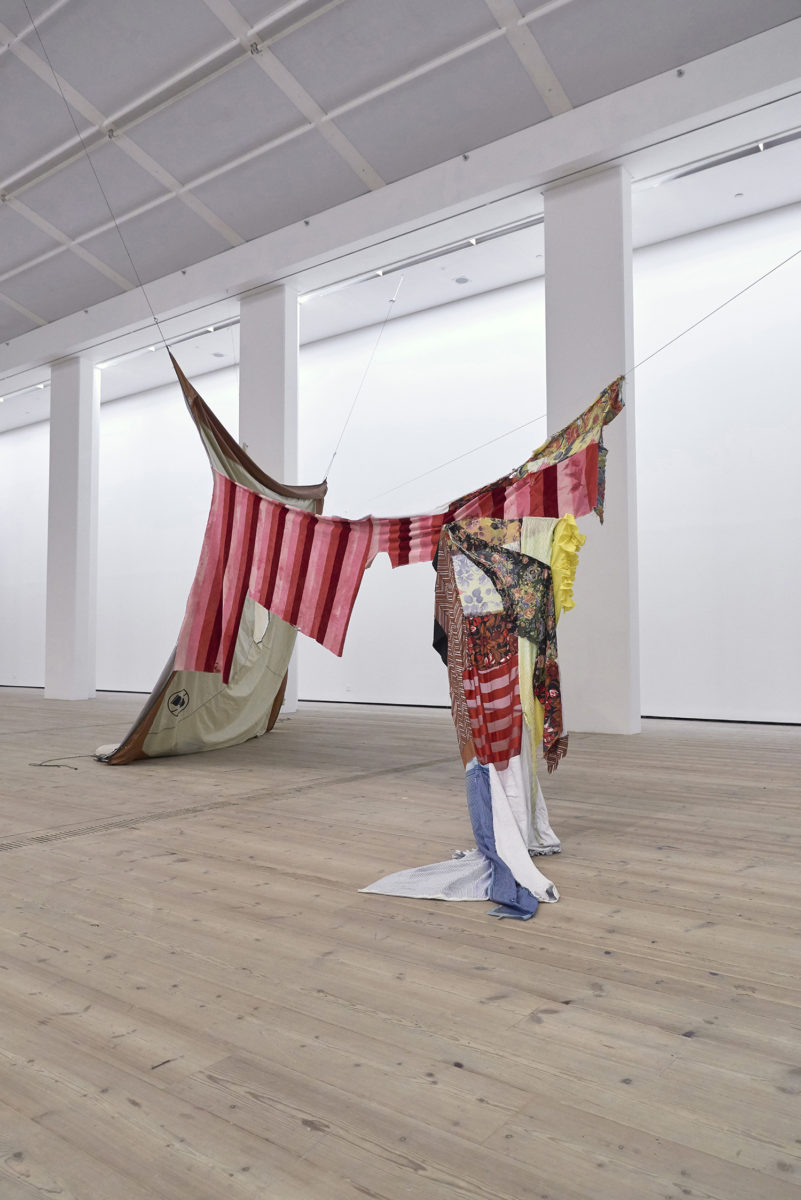 Can you talk to us about your studies. What were you interested in?

I wanted to study everything and I had a real interest in the different principles of art; photography, sculpture and painting. I went to an arts high school in Maryland so in college I wanted to continue without having to choose one or the other, and I wanted to be able to develop a natural relationship to art. Immediately when I got to (The Cooper Union) I took all three of those courses. It was really liberating. That school was super important because it was about thought and innovation, and not so much about restriction. By the time I had graduated, painting had become a lot more serious to me in terms of the history and its conceptual concerns. It became a space that was meaningful for me to continue to question, and the results that I came up with made me want to think more in depth about it.

When did you realize that you could make a career out of being an artist?

When I came to New York, I had so many questions. I was so excited to be here because it was my dream place. I interned at a gallery called Rivington Arms in the Lower East Side which was representing Dash Snow at that time and a number of other artists. I wanted to better understand the workings of a gallery, the relationship between an artist and a gallerist, and how an artist could be supported in that way. I was looking at it, not from an artist’s vantage point, but from an administrative aspect. From there, I ended up getting a job in Garth Weiser artist’s studio, and I learned a lot from him. By seeing his process, I learned that people could earn a living from making work, and that if I worked hard enough, it could be a possibility for me as well.

You took a lot of time to develop your foundations as an artist – through art school, research, interning, working for artists, even on the admin side. Why was that important for you to gain that experience?

I think there are times when it’s important that an artwork has academic context, and that the artist is informed and generous about the place that the work comes from, in relationship to art or the history of painting, or a relationship to a previous zeitgeist. People such as Brice Marden, Chuck Close, Richard Serra all came from Yale, and are monumental figures that I look up to.

They went through that training and education and I feel like it was really important for me to do that and make sure that I was here for the long haul and not just being frivolous or superficial.

Previously you’ve referenced Robert Rauschenberg and Sam Gilliam as influences – do they still inspire you or does that lessen as you come into your own as an artist?

I really appreciate art and that’s how I’ve come to be an artist. Rauschenberg is somebody I’ve thought about for a long time and even more so this year because I did a residency at the Rauschenberg Foundation in Captiva, Florida. I got to work in his studio and that was monumental for me. That kind of closeness, to be able to examine the space… it was compelling to be able to see what his brand of innovation afforded him. I gave myself permission to actively think about his legacy after that. But there are others; Basquiat, of course. I would say he is somebody I’ve thought about. He died the year after I was born. I’ve also been thinking of Richard Tuttle – people that have been around for a long time that have served their practices in really strong ways. 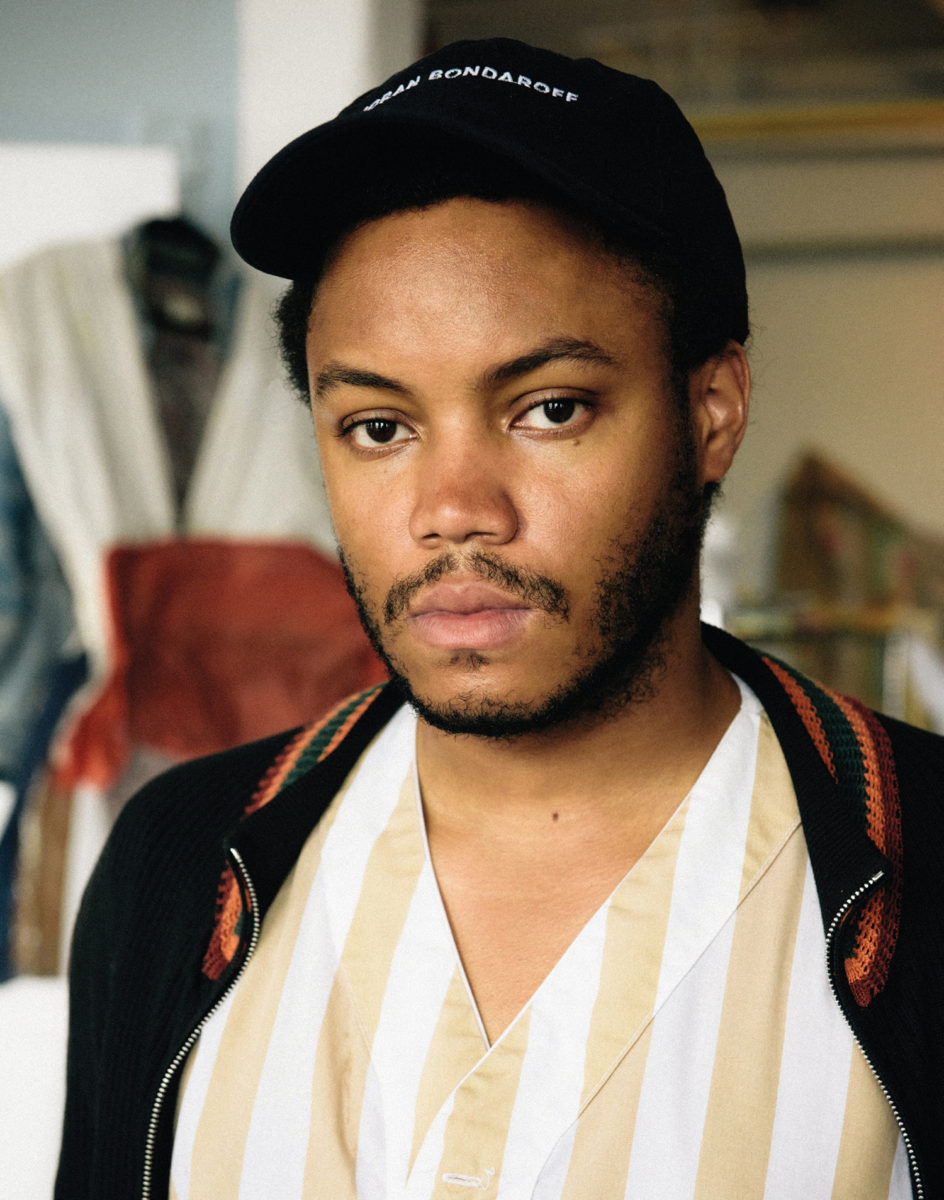 Why do you identify specifically as a painter?

It has to do with the lineage that I feel like the work has come from. I see painting as a lot of things, but mostly there’s a relationship to surface and material. I’ve been thinking about the canvas and how painting that revolves around framing contexts that mostly have to do with a rectilinear relationship. I’ve also been thinking about the tools with which we identity as existing with the history of painting. I feel like there hasn’t been much advancement in terms of the apparatus involved with painting, or that any advancement ends up being forgotten in history.

I’ve also been thinking about this movement in Paris called Supports/ Surfaces where painters dealt with space and structure, including surface. Many of these painters are being shown a lot more now, and I see that the work they did as having a part in advancing the technology of painting – in breaking it out of its reductive frame for it to become more tangible and to speak more directly to histories of materiality.

Did you immediately begin working in large scale or was that something you worked up to over time? Was it intimidating to make paintings that large?

I think what I regard as large has changed over time. One of the things I started thinking about after grad school was how to push the identity of the work. One of the biggest moves I made was doing away with the wooden stretcher bar convention that painting has had for a long time. I began moving towards the space in the center of the room.

I’ve long been thinking about monumentality, or about a relationship to a monument, and the challenge for me would be to be able to maintain the kind of detail, care and attitude that the work possesses. So it’s been a constant, very careful, thought process for the work to physically expand. But it feels very natural to the concerns of the work.

You impact the meaning of everyday materials – where do you source or find what you use in your work?

It’s definitely a combination of things because I don’t want there to be one space that could dictate the work’s meaning due to where it comes from. There are times when I buy things from a store, a home goods interior store, or I’ll go to a clothing shop, but mostly it’s thinking about daily tasks and finding something that would be challenging to use as a material. Or something that continues the process of questioning surface and materiality.

So it’s not planned, as in, you don’t go out with an object in mind to bring back?

I go out looking for certain forms. Right now, I’m kind of obsessed with frill – like gathering, ruching – so I’ve been going out looking for it because it ends up having a nice finish. And there’s this relationship with elegance, a kind of frivolity, excess, like Rococo or Baroque. There’s also a supposed coldness to the rigid white wall that often comes with the gallery context, so I’ve been thinking about what would be a really active contradiction of the space. 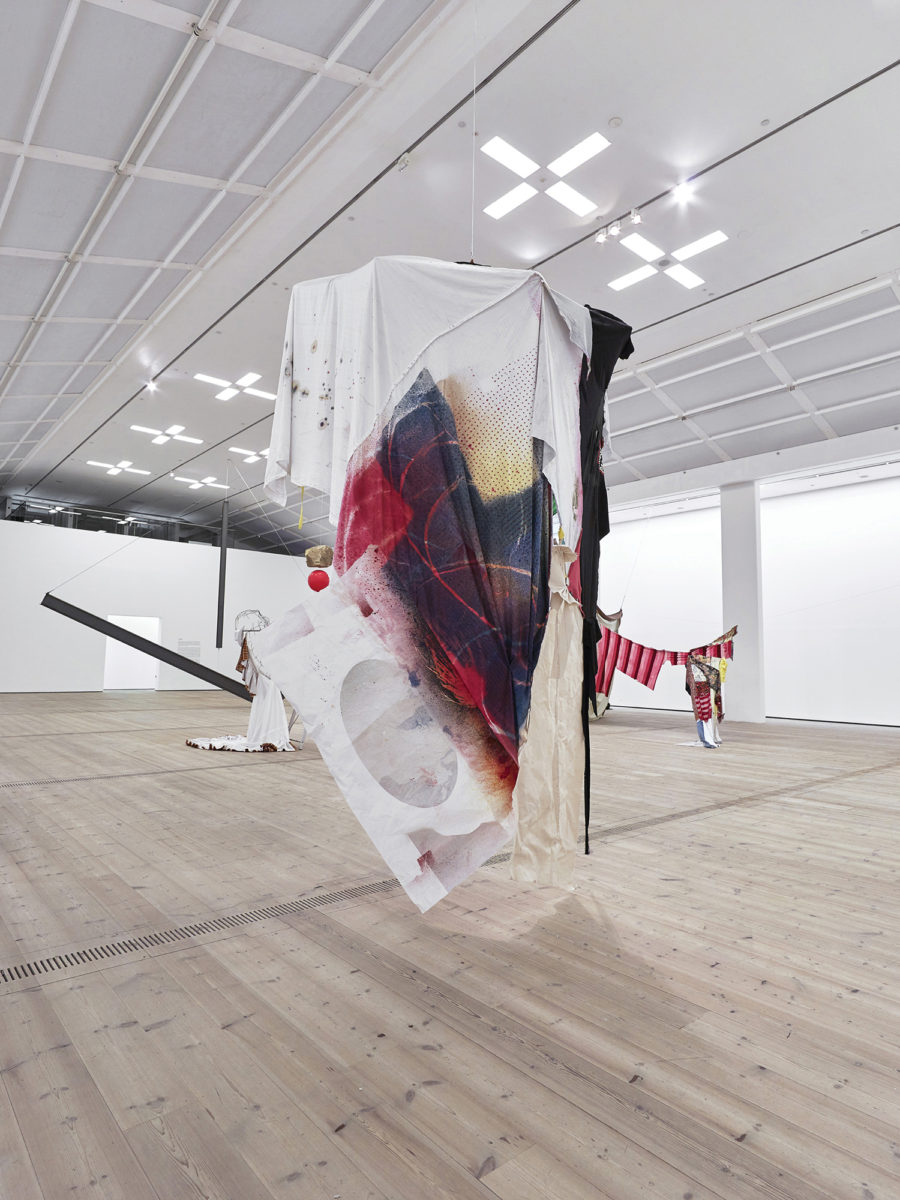 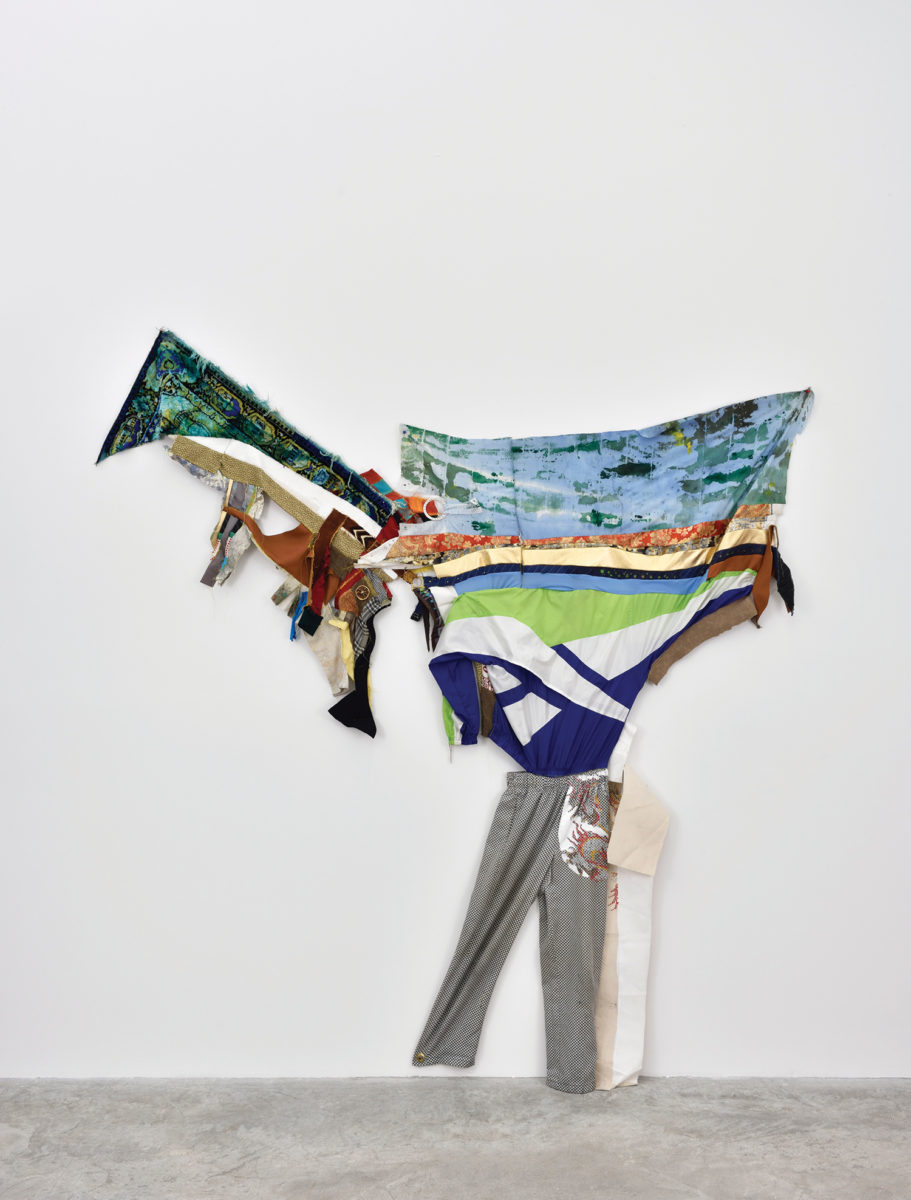 Implied Reebok or Desire for the Northeast Groover, 2016

Are you aware of what the painting’s meaning is before you begin or do you add meaning as you go?

It’s nice to have epiphanies while the piece is developing, but I like to be aware. I think the titles end up dictating a starting point that brings people closer to the work or maybe the titles make it more complex. For me, they end up being a finalizing gesture.

How does New York inspire you and your work?

I live in Harlem and I work in the Bronx, so my daily commute to the studio ends up being really influential. I take note of things or I take little snapshots on my phone. It’s nice to think about the city as a space of inspiration.

What do you do when you’re not creating art?

Even the hobbies that I have can end up relating to the work or end up being really nice points in which I can mine certain aspects from.

Can you talk about the importance of abstraction in your work?

I see abstraction as a strategy. I feel like it has social relationships and also aesthetic relationships. Abstraction ends up being a stand in or a symbol for a more complex idea, or to make something more tangible. An abstraction can be present, but it can also obscure and hide – hide information or hide physicality – and there’s definitely that in my work.

I think a lot about abstraction in relationship to a kind of fragmentation, where I think about pieces and parts that have really explicit origins. This is in relationship to what we were talking about before. Like, where does the work come from? Where does fabric, or whatever it is, come from? It’s mostly about how the fragment reads, how the fragments communicate, and how that can be unified to mean something collectively different, or to communicate some kind of emotional complexity.

Do you think your work comments on the value of art, in that you reuse materials and fabrics and give them new meaning through context?

I think if something can be salvaged and reused and seen in a context that is beautiful or expresses some kind of meaning, then that can be very transformative for the viewer or the maker.