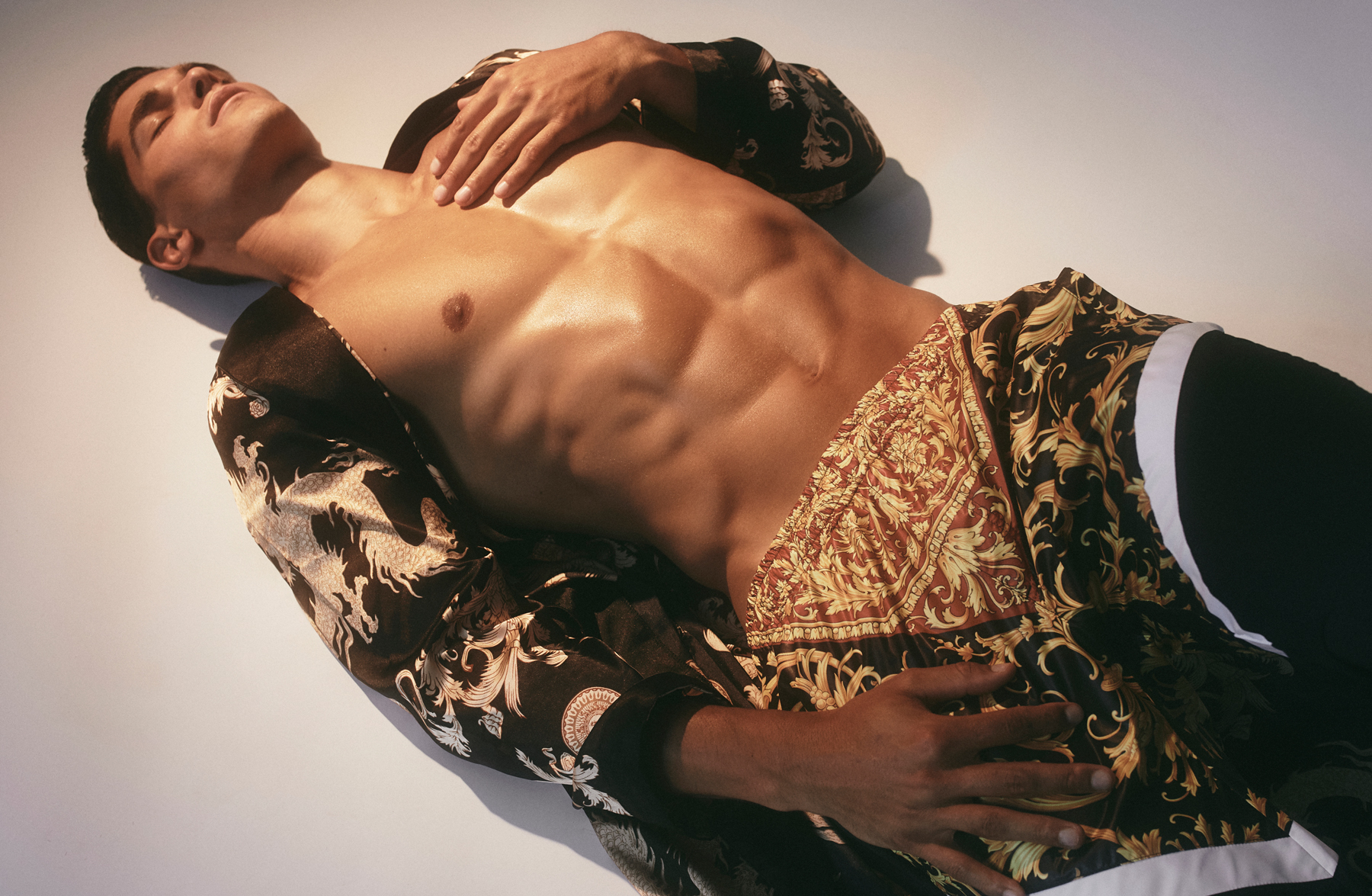 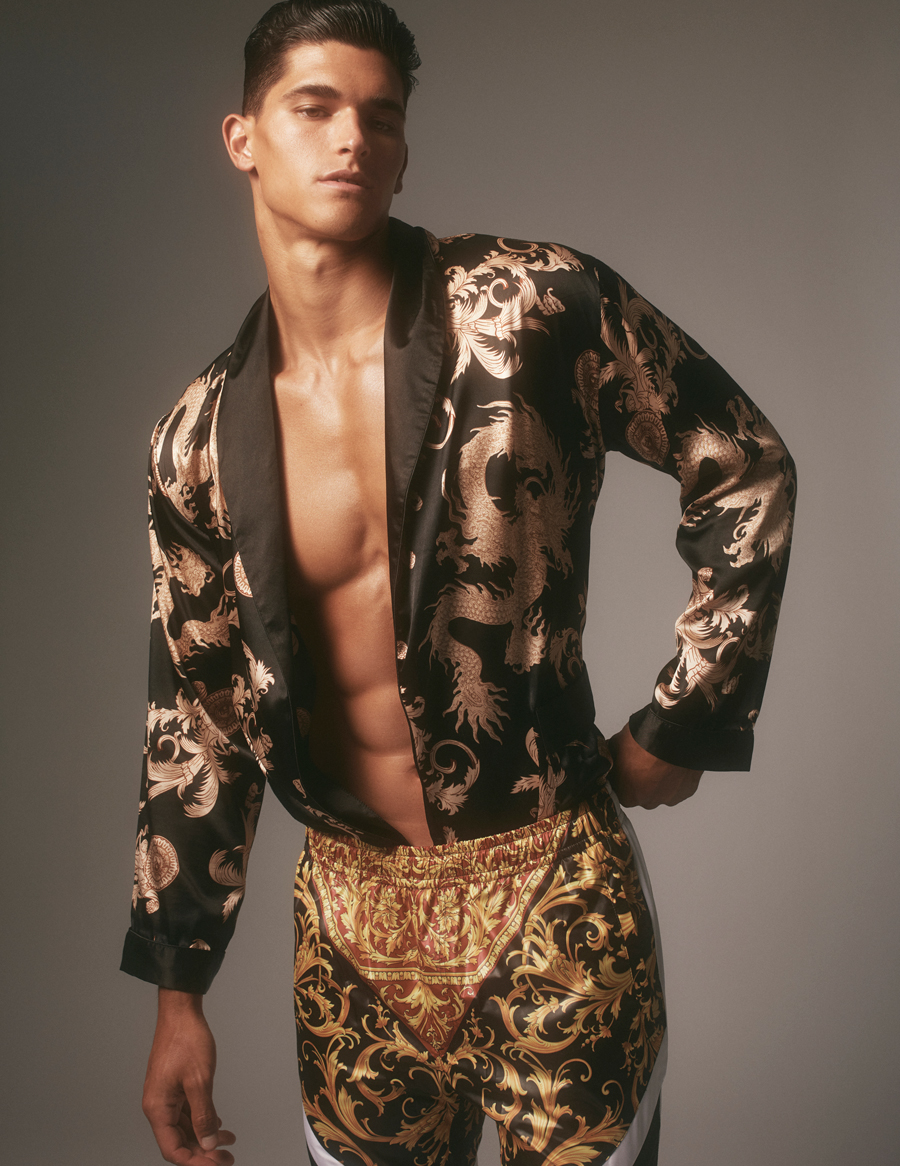 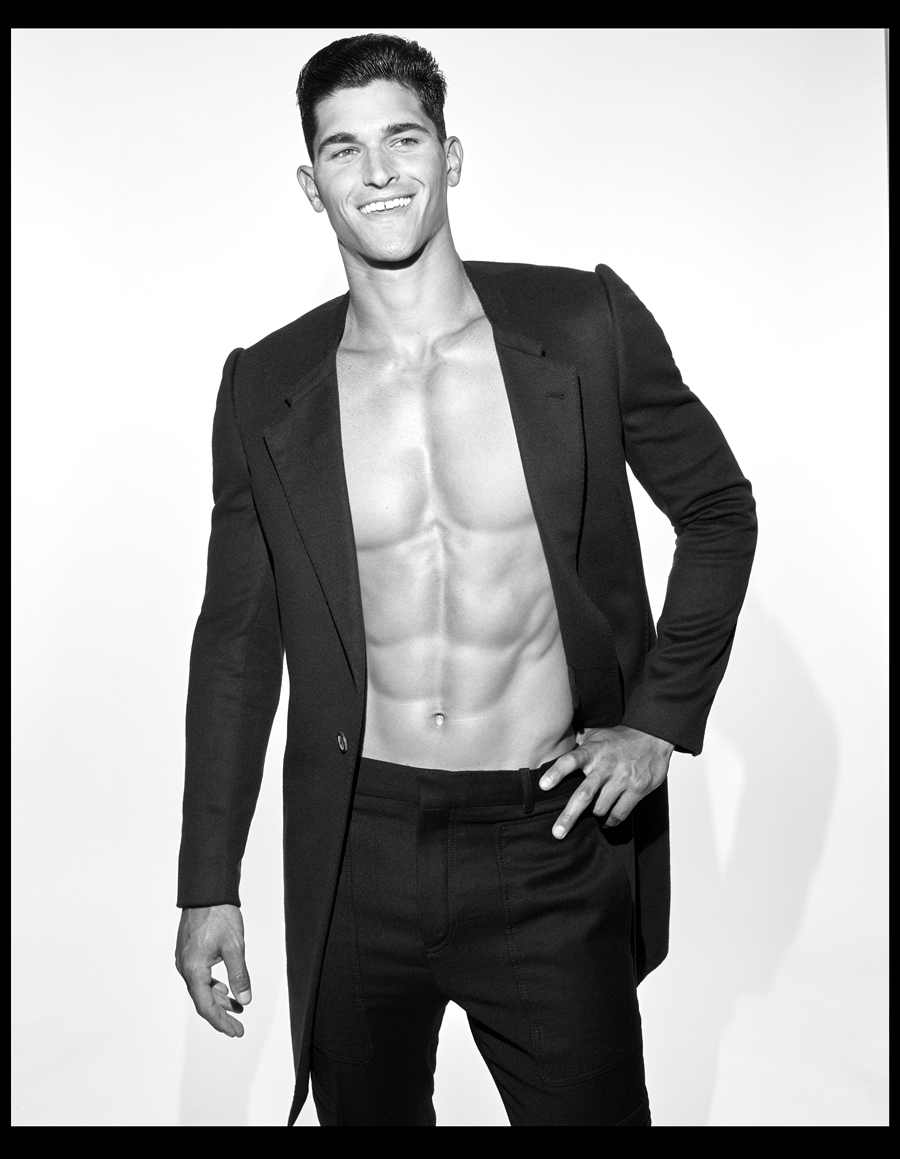 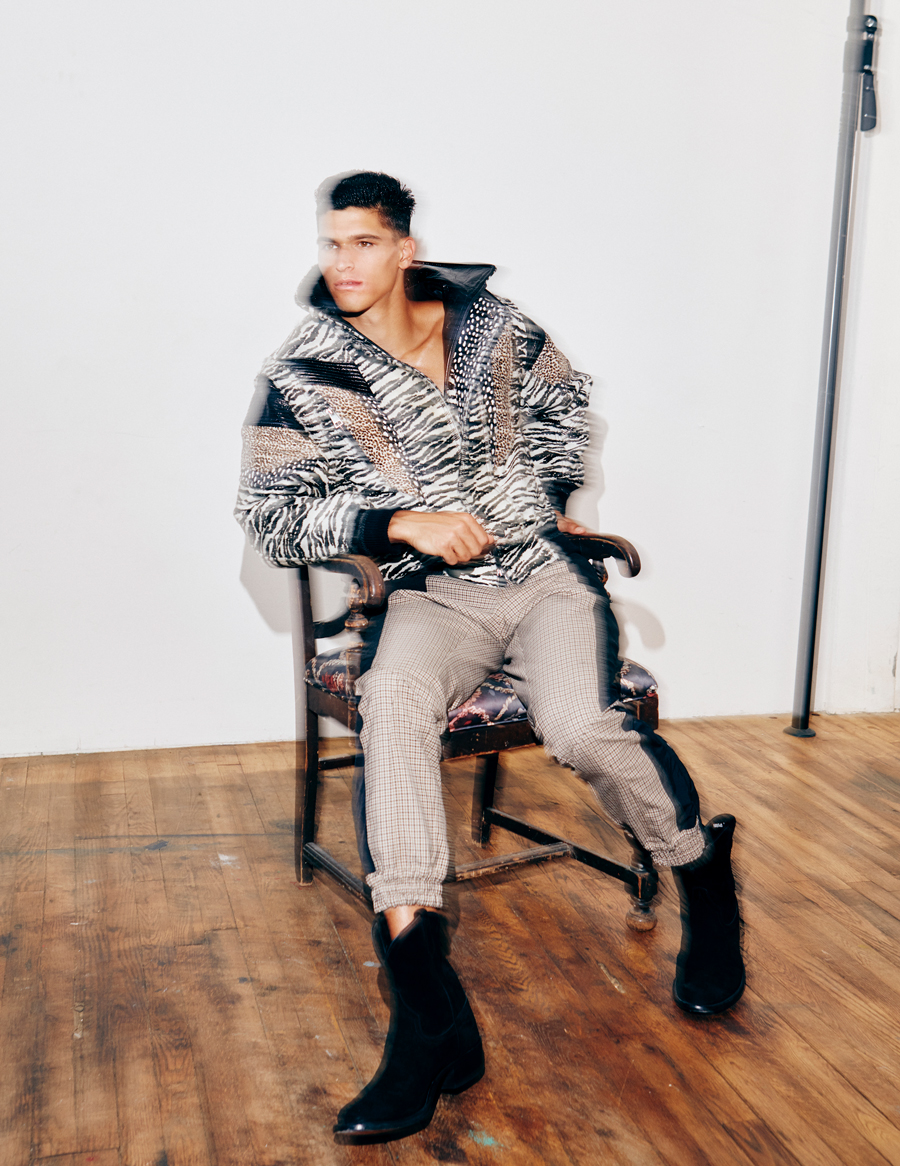 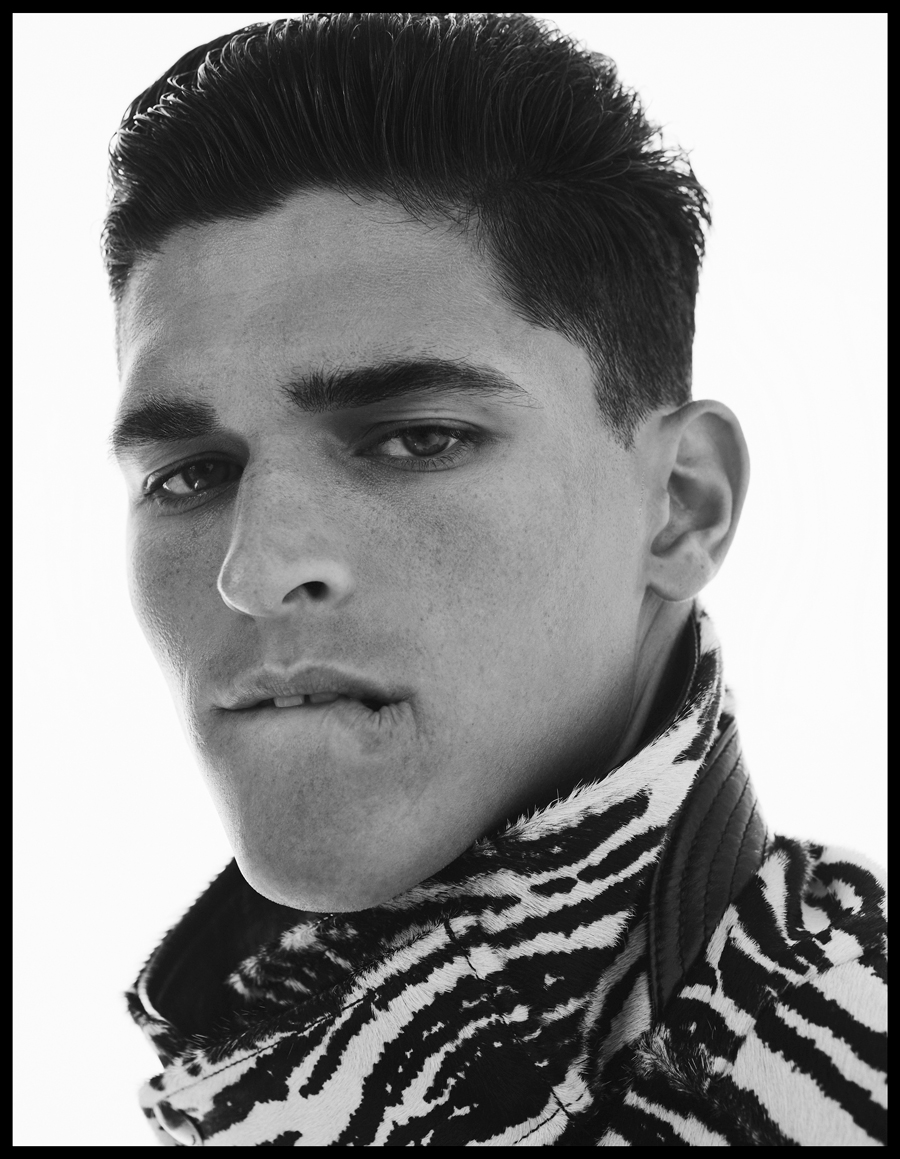 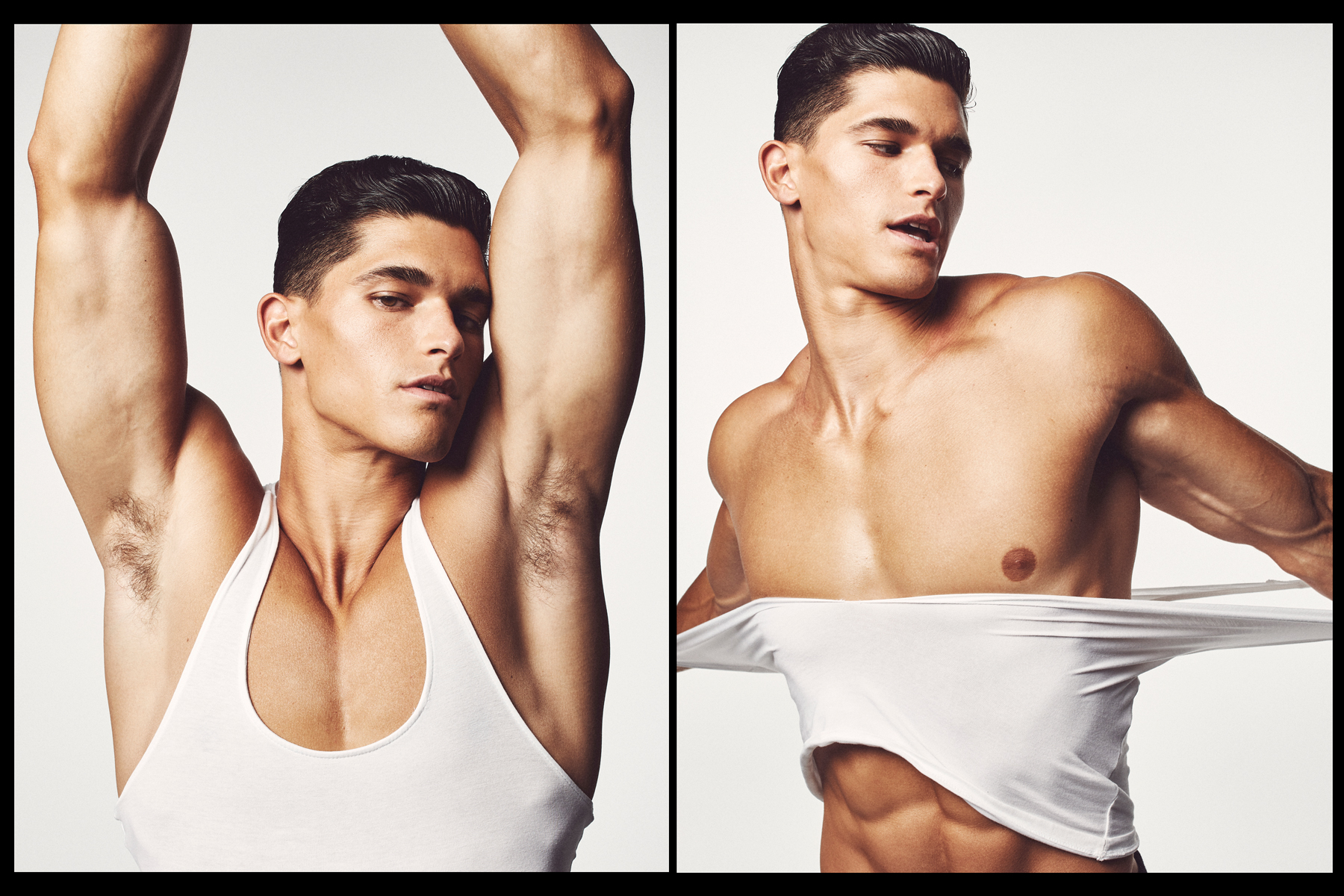 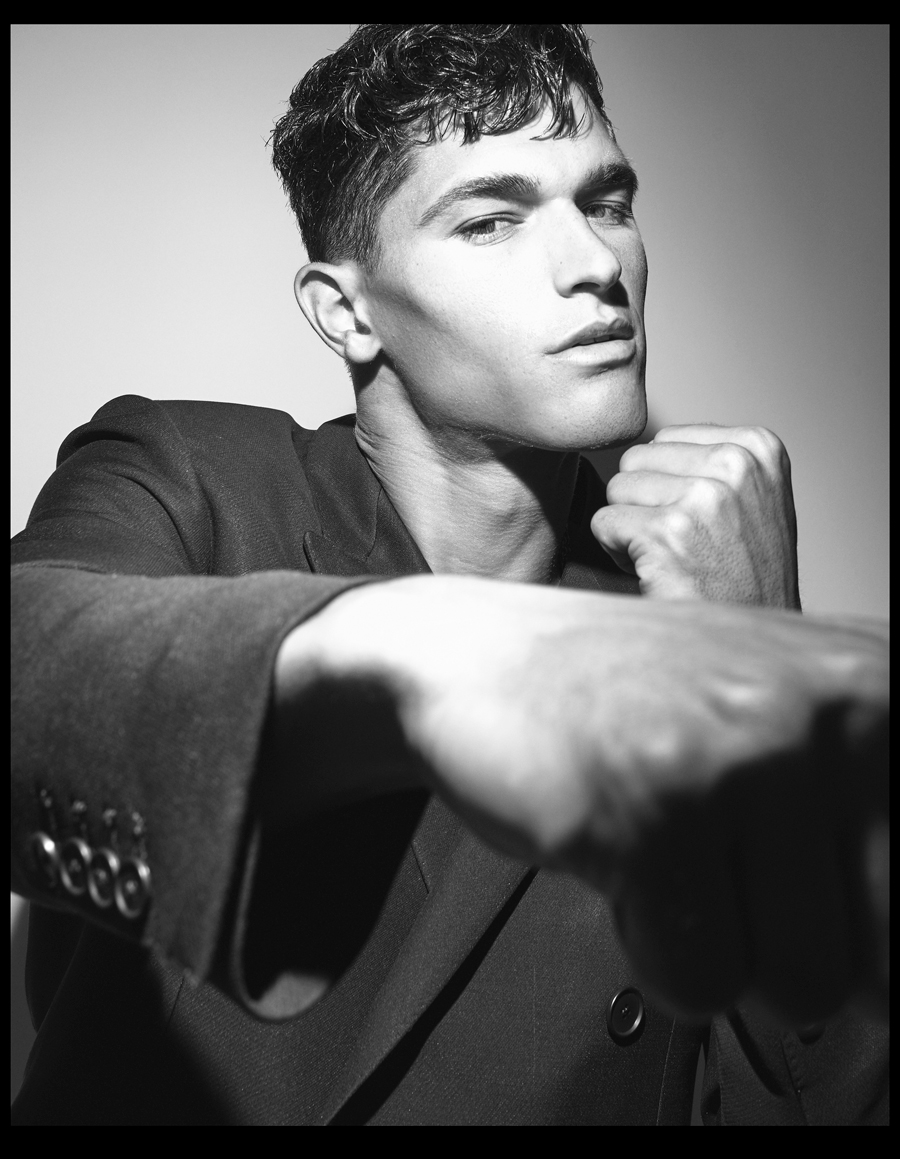 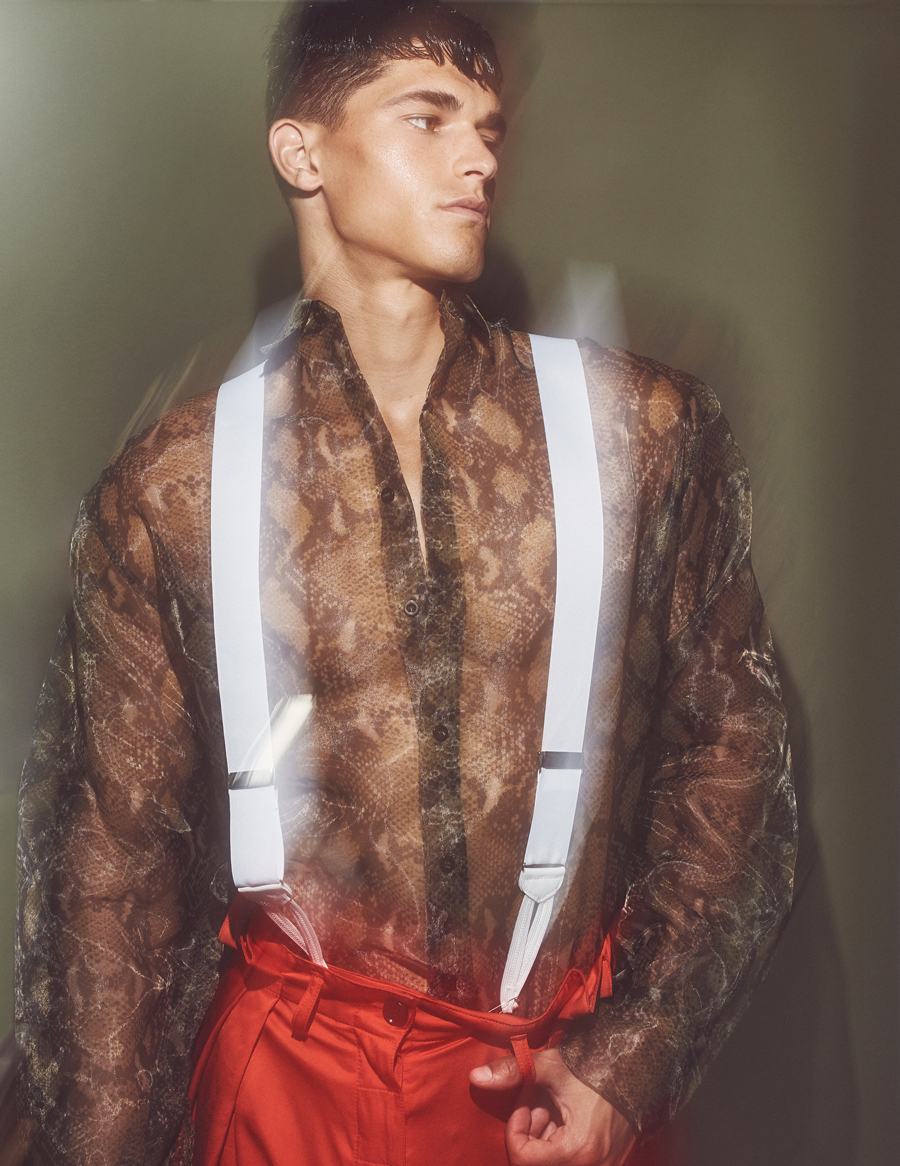 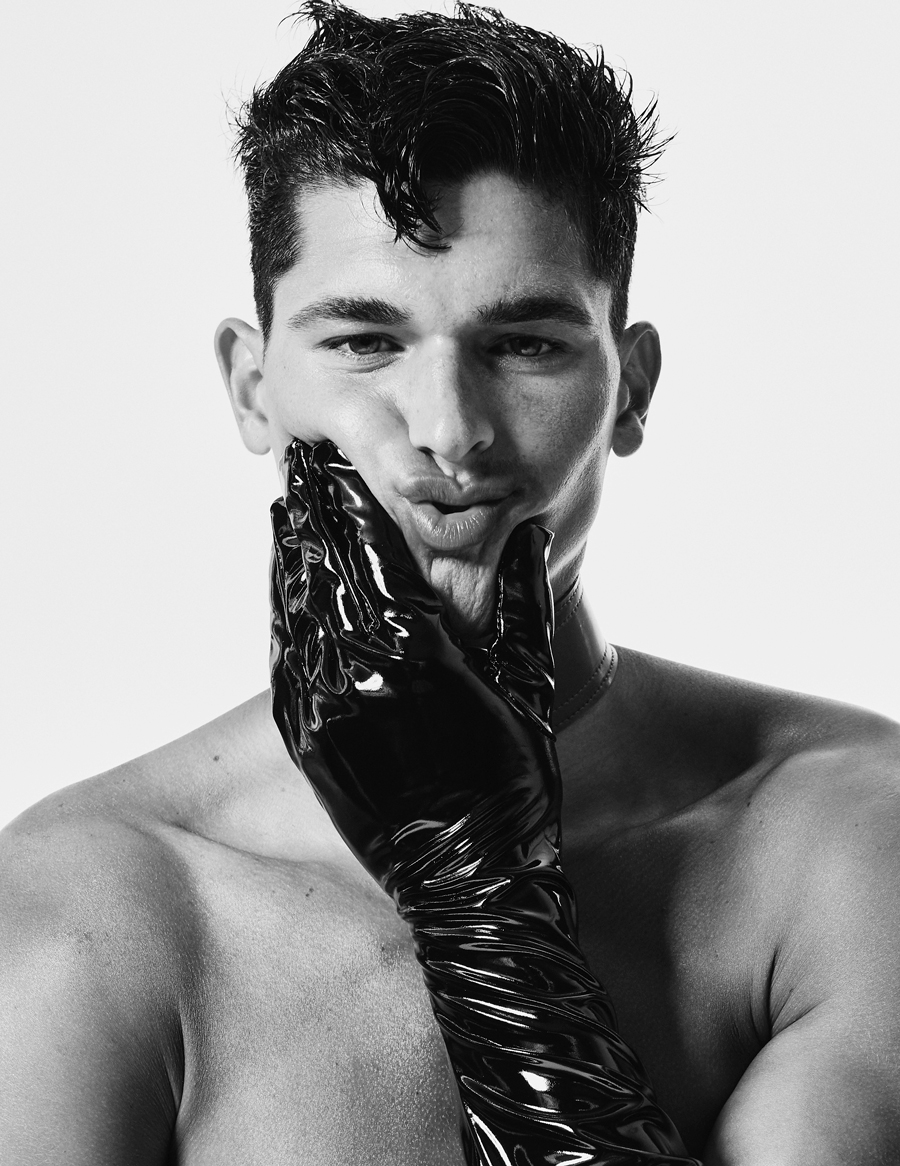 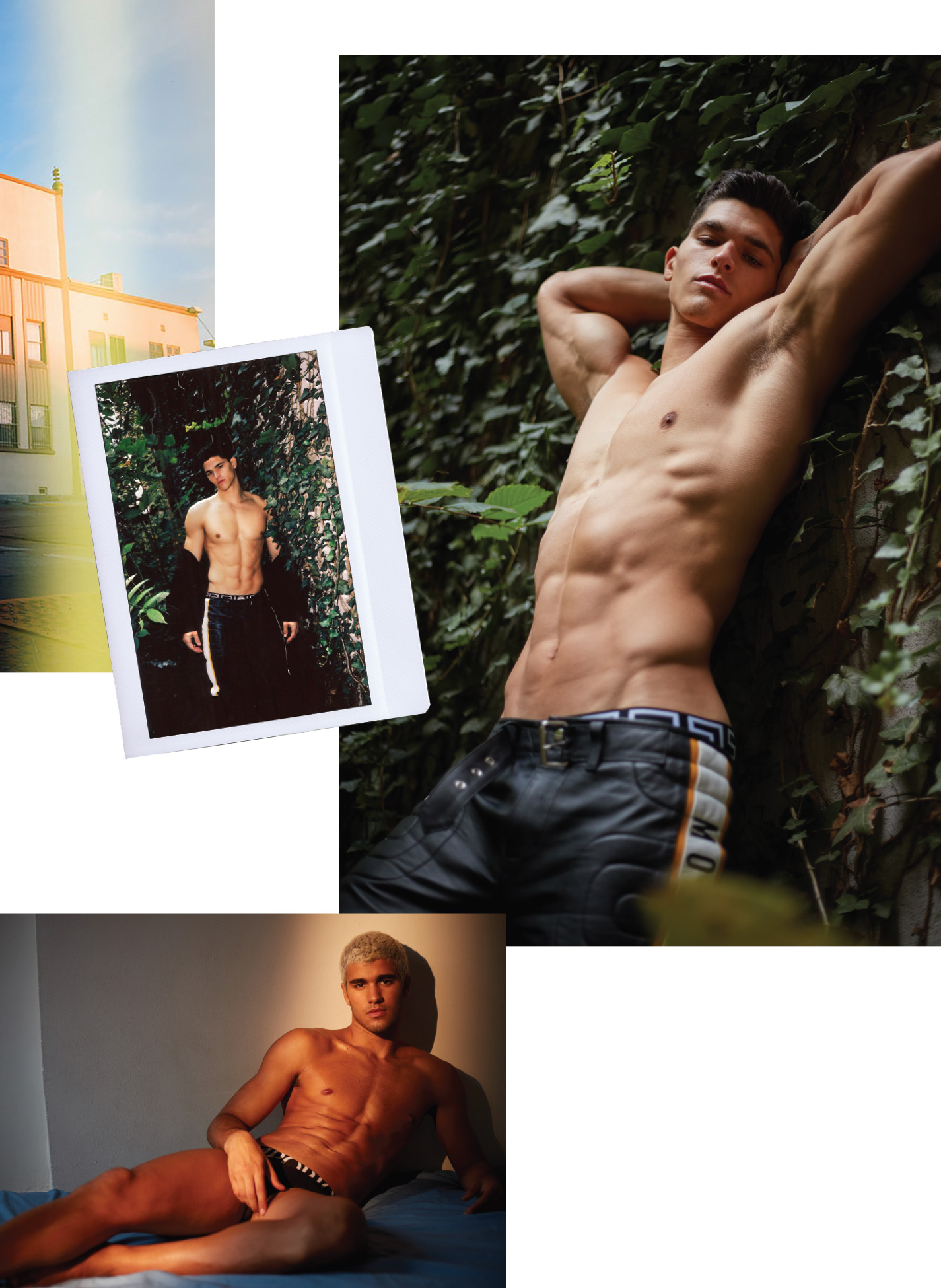 Top: On Trevor–Jacket by Versus Versace, Underwear by Versace, Trousers by Moschino. 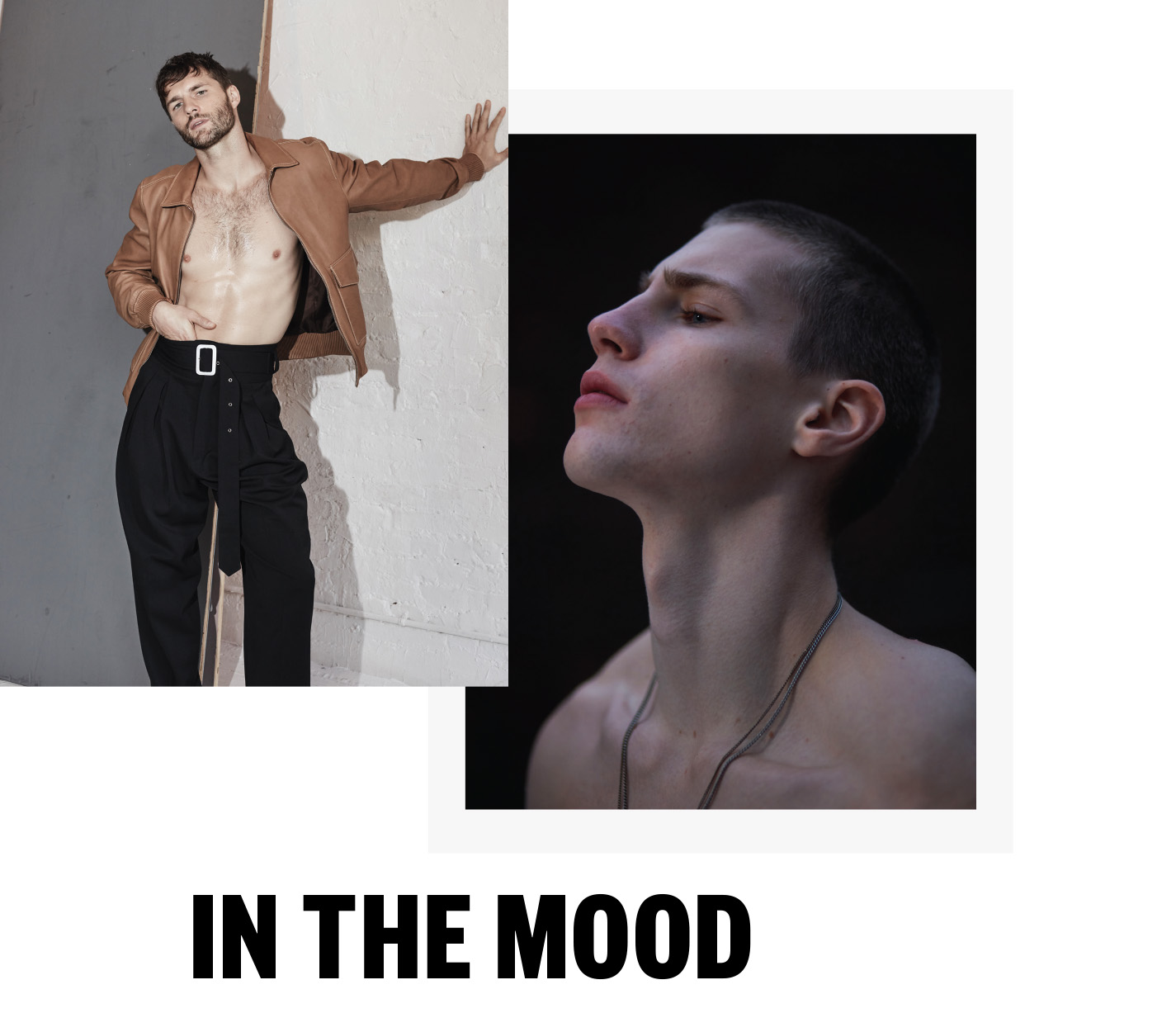 Left: On Thomas– Jacket by Michael Kors and Trousers by Kenzo

Right: On Augusta– Necklaces by Coach 1941 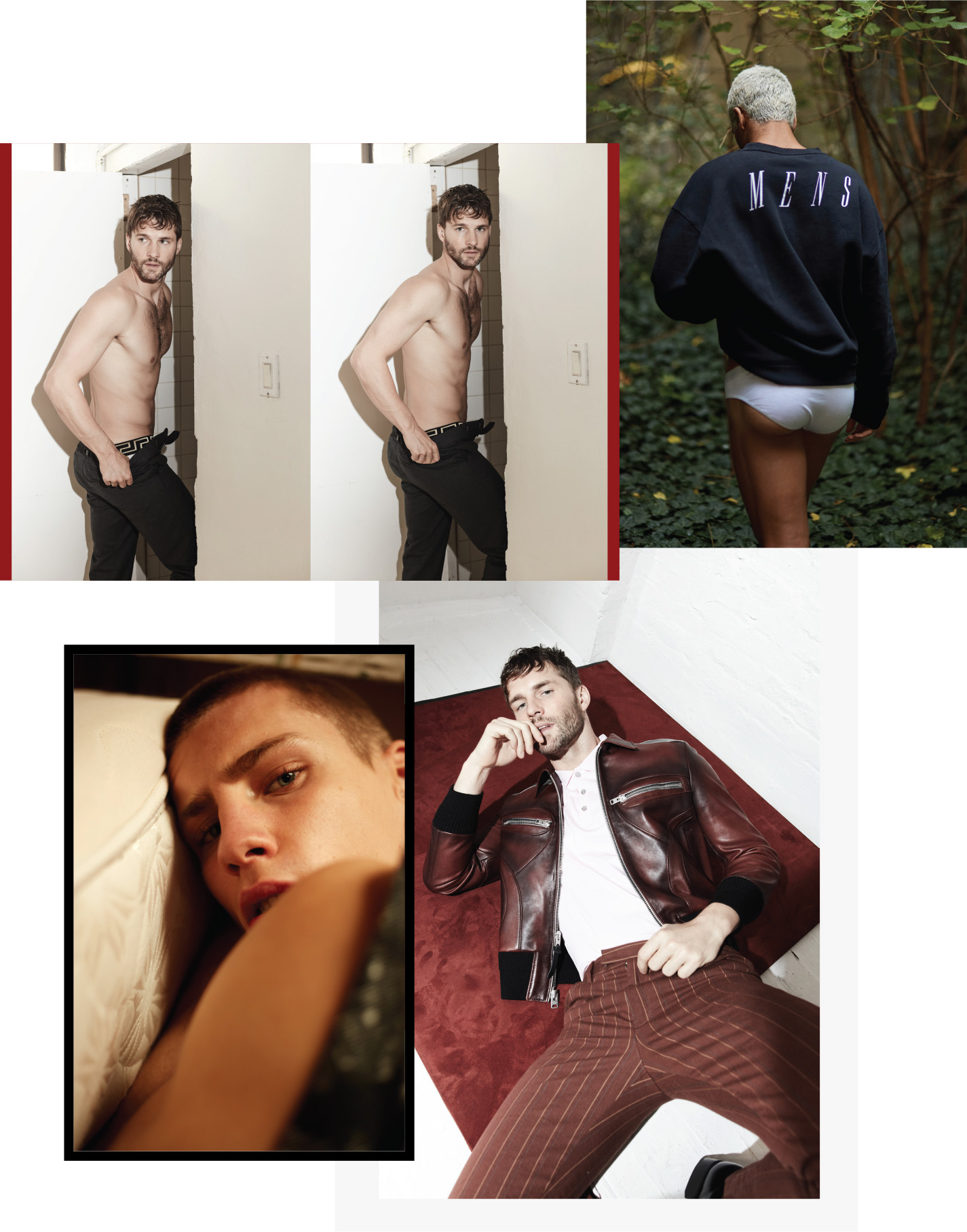 Bottom Right: On Tomas–Jacket and Trousers by Coach 1941, Polo Shirt by Calvin Klein 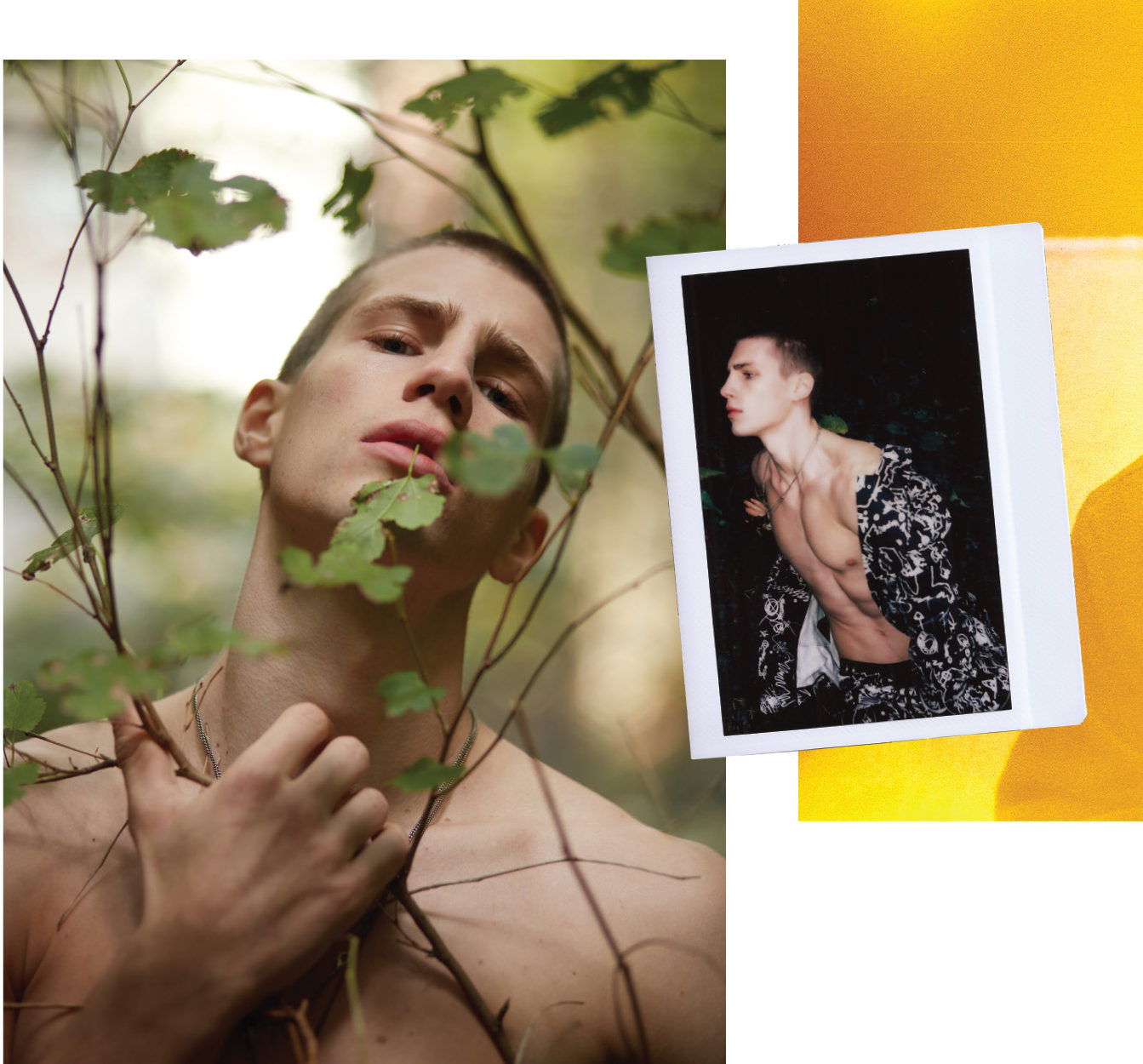 On Augusta– Shirt and Trousers by Versus Versace 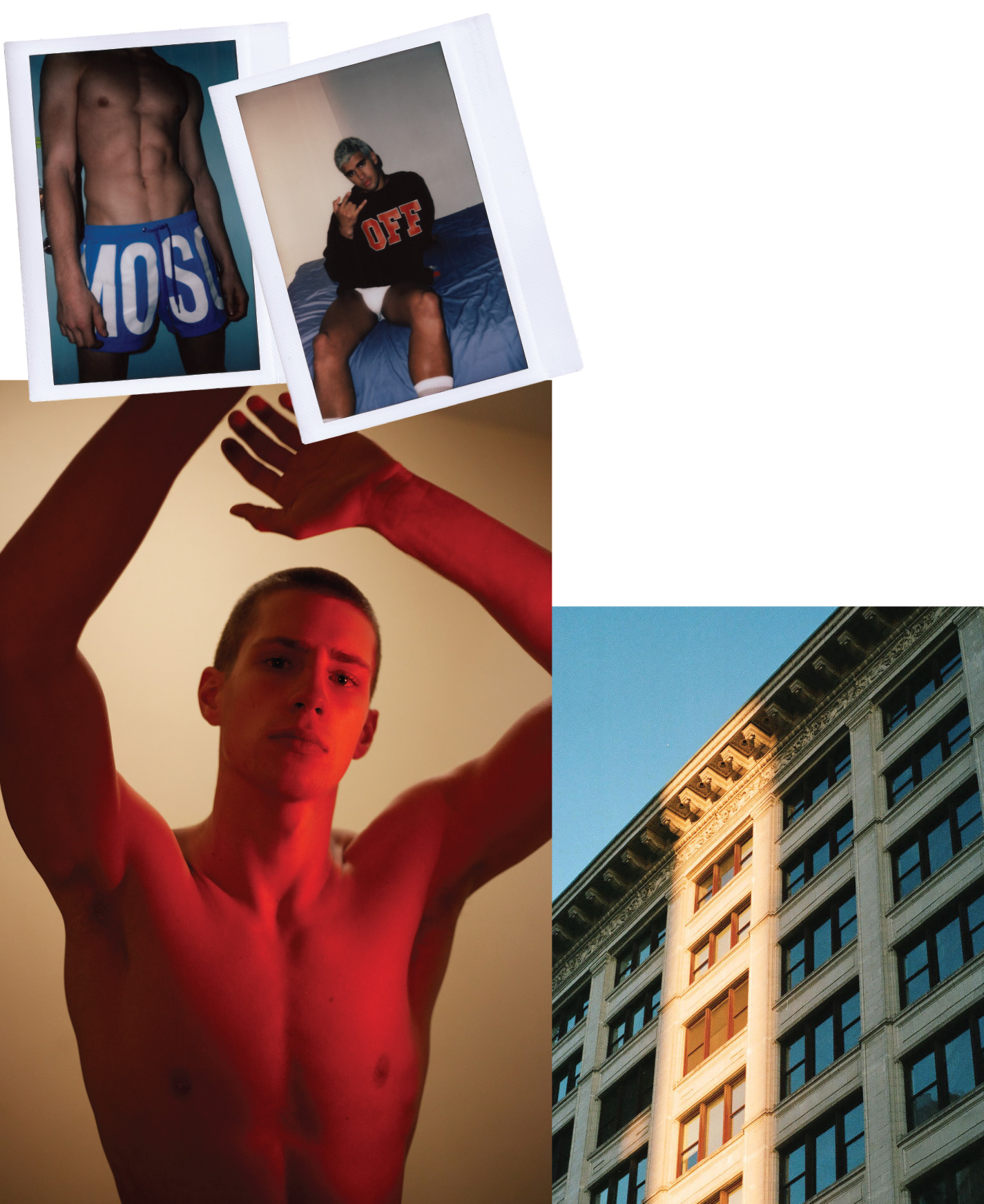 Top Left: On Augusta–Shorts by Moschino.

Top Right: On Pietro–Sweater by Off-White, Underwear by Calvin Klein. 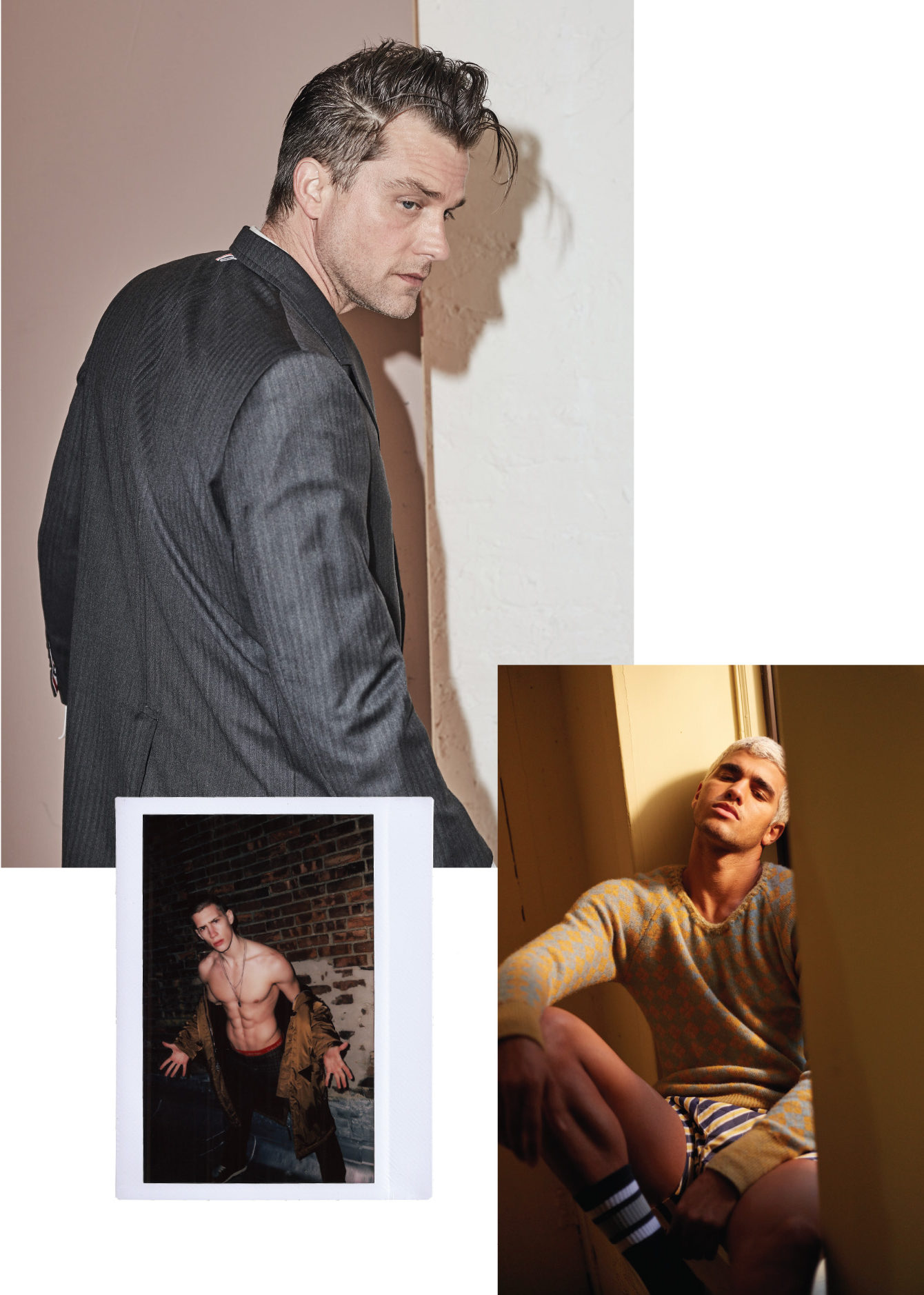 Top: On Thom– Jacket and Shirt by Thom Browne.

Bottom Right: On Pietro– Sweater by Vivienne Westwood, Shorts by Kenzo and Socks by Stance 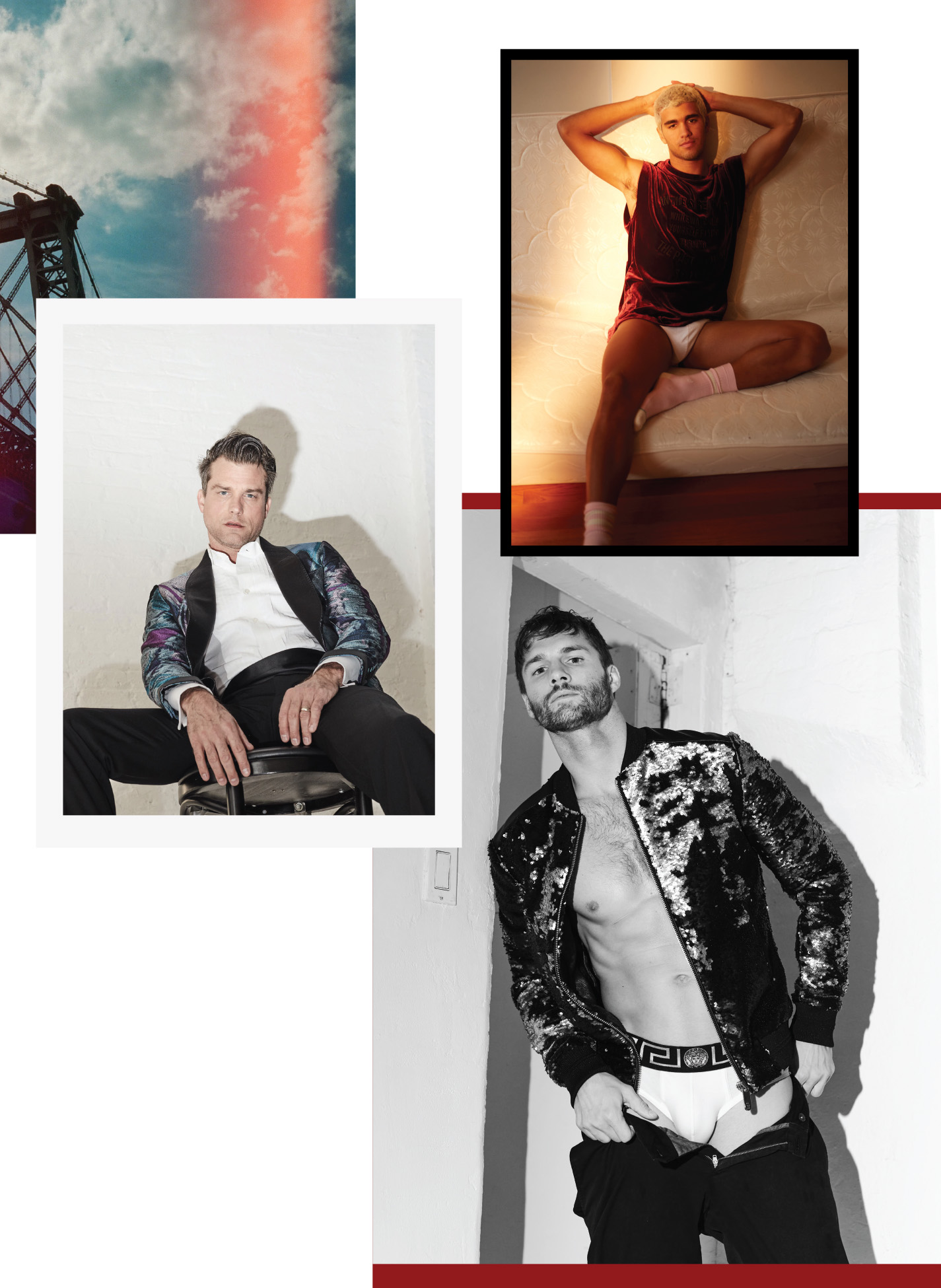 Bottom: On Thomas– Jacket and Trousers by Philipp Plein, Underwear by Versace. 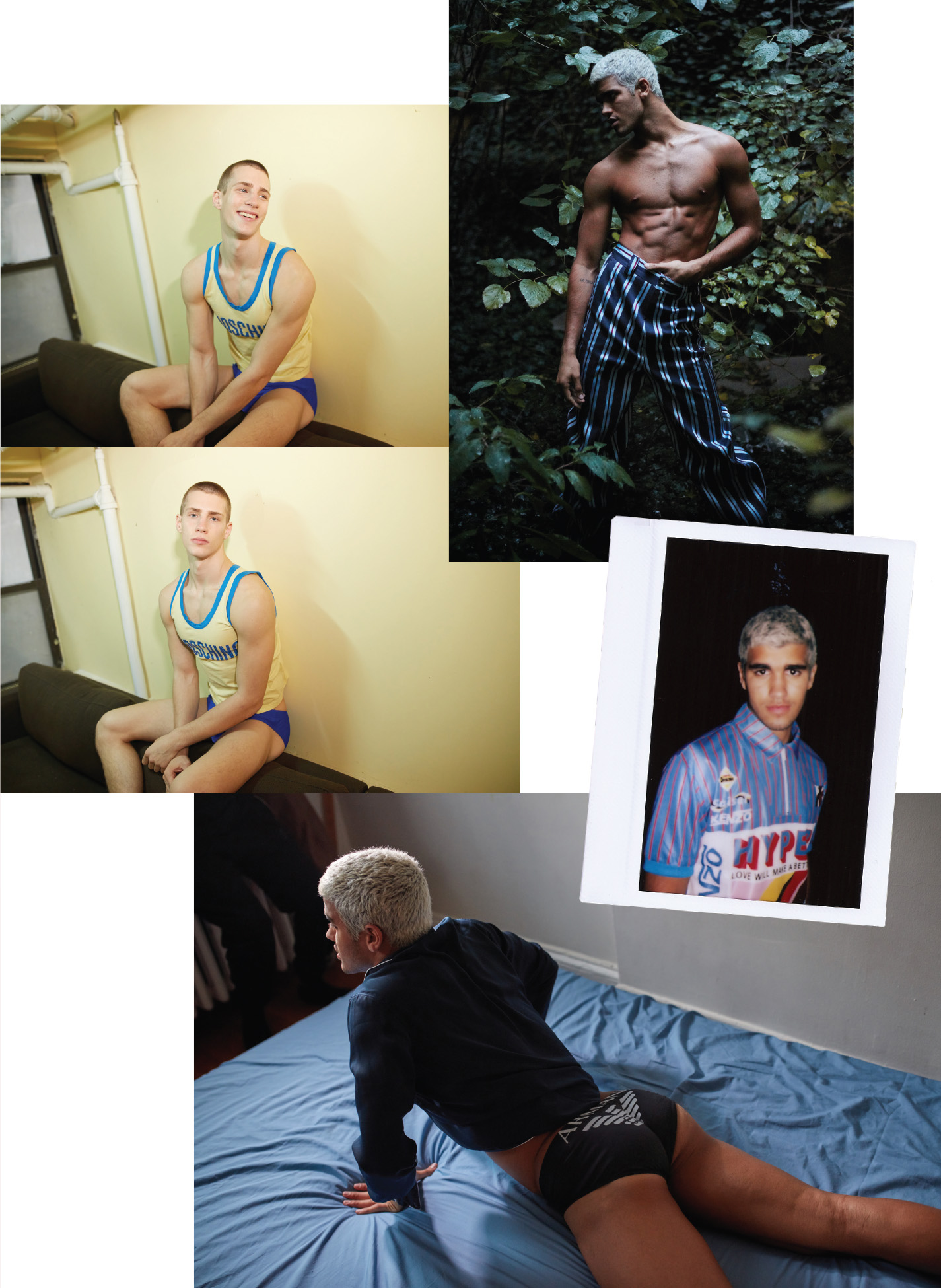 Top Left: On Augusta–Tank Top and Speedo by Moschino.

Top Right: On Pietro–Trousers and Shirt by Kenzo.

Bottom: On Pietro– Shirt by COS, Underwear by Emporio Armani. 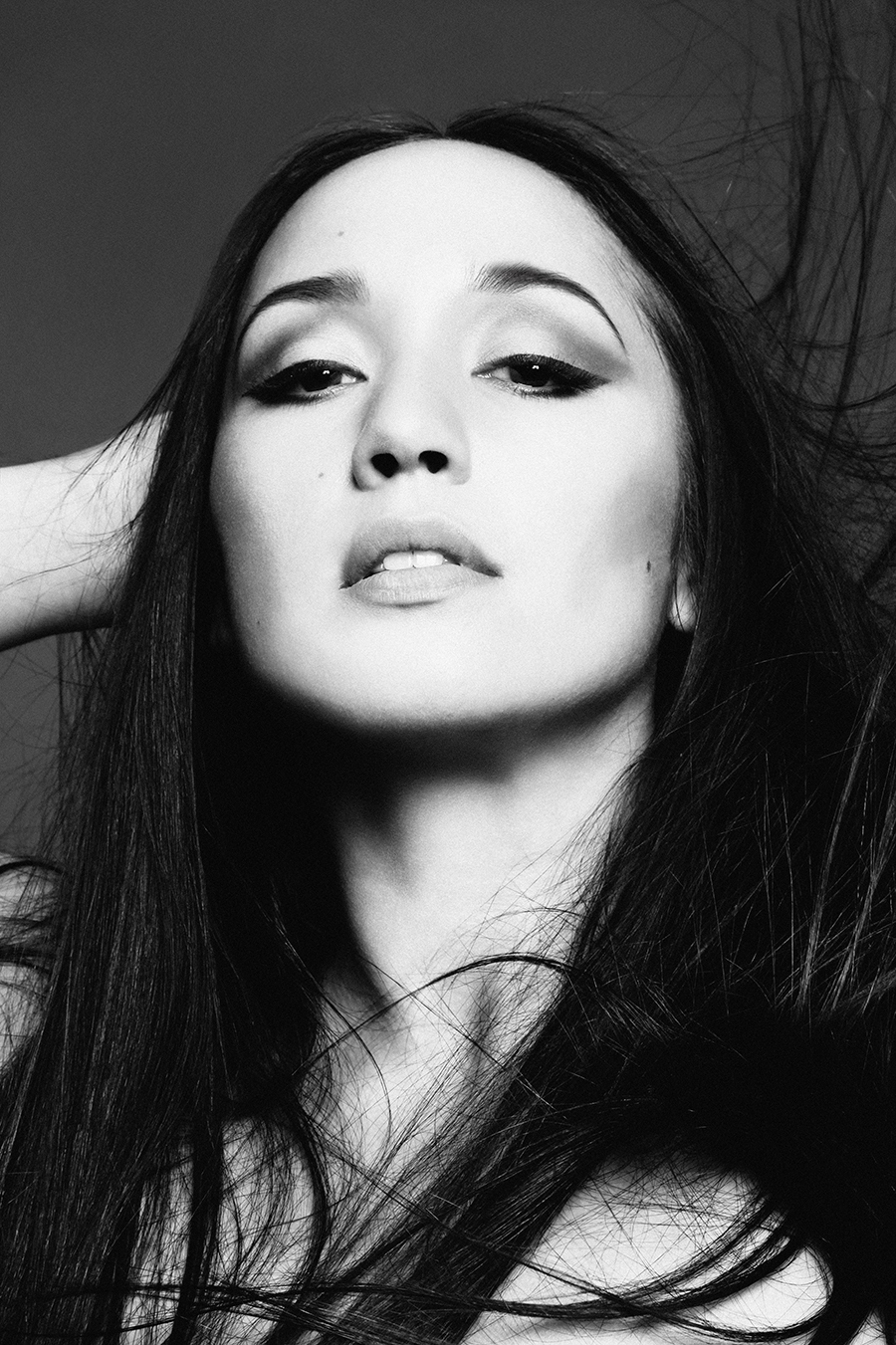 With an A-list roster of clients including Madonna, Stella McCartney, and Rachel Weisz, and expanding her classes for the public at NYC hotspots like the Standard Hotel, Nicole Winhoffer has successfully built the foundation for her fitness empire. Inspired by art, dance, music, fashion, and pop culture, the fitness-lifestyle guru gives us training tips and shares healthy practices for the mind, body and spirit.

Nicole’s approach is holistic, incorporating her western knowledge of anatomy and sport science with dance and eastern practices that focus on chakras, acupuncture points, and energy work. The NW Method has played a leading role in shaping some of the best bodies in the entertainment industry, including, Madonna, Mya, Stella McCartney, Steven Klein, and Rachel Weisz. We sat down with the fitness mogul-in- the-making to inquire all things NW.

You have worked with an incredible roster of A-list clients and have steadily built your fitness empire to include classes in the New York City area so that others might also get an opportunity to train with you, how did you come to pursue fitness as a career?

I was always intrigued by the anatomy, physiology, and mind of the human body. Dancing, sports, and choreography introduced me to ways to keep myself fit and mentally clear, while doing what I love. When you feel fit, you feel strong; when you feel strong you feel beautiful. Being able to help others realize the beauty in themselves is what led me to pursue fitness as a career. Movement and music helped me to get mental, emotional, and physical results. I want to share it with the world.

The NW Method is a very interesting blend of cultural & scientific influences, how would you describe your approach to anyone interested in training with you for the first time?

My approach is self-expression through movement, cardio and sweat. It’s new, its creative, it’s a real life way to integrate art, music, fashion, and movies to tell a story with your body. My VIP clients are in the entertainment industry and it’s beautiful to collaborate with other artists that keep the world moving through the arts.

Any advice you give to a first time client before their first session with you?

Commit to change. There is ALWAYS a solution. With the right knowledge and tools you can master anything. Positivity and energy are two must haves at all of your sessions with me. Energy is everything ! Did you know your body is 75% water? Water responds to thoughts ! Everything is vibration.

What are you currently working on in New York?

I am about to open up my studio, videos and live streaming. I have new movements and classes that I am so excited about ! Roc Nation management and I are working on new projects!

Any plans for global expansion, I see your offering NW certification courses?

Yes, I encourage anyone with a passion for fitness to certify themselves and begin professionally inspiring others. There are many plans for global expansion that we are very excited about! We currently have trainers in India, London, Prague, and the Unites States. I gather my inspiration from cultures because each city brings something special and new to the world. It is beautiful and inspiring.

You have a very active schedule, aside from fitness and working out. Do you have a beauty secret or regimen you want to share?

My beauty secret is making time for myself. Making sure I get enough rest, occasional massages and healthy eating lifestyles are what keep my inner beauty glowing. Curiosity is important because it keeps the brain young. When a child is curious, they are inventing and wondering. This ignites new brain neurons and fires the so serious spirit.

Any new favorite wardrobe pieces or workout gear that you can’t live without?

I absolutely love my Adidas by Stella McCartney pieces. My Adidas hoodies and shell toe sneakers are always in my bag. I always keep a change of clothes in my bag that includes a leotard, booty shorts and a hoodie. I love the duality of showing my body and layering. It’s sexy.

Because your work relies on your teaching abilities and active engagement with clients, I imagine it is important to always be creating new or individualized routines . What inspires you to keep your work fresh and creative?

I am constantly inspired by everything around me. Sports, fashion, art, it all inspires me to create something that is reflective of “now”. When you live in the moment, you evolve with it. I get bored easily and if I am bored I know I am not expanding or growing. I look to things that run my imagination and move my brain and body.

Any places, trips, or experiences that provide you with that creative recharge when you need it?

I have a fond place in my heart for Brazil. Their culture is so beautiful and free. The people their have a welcomeness and movement that makes me feel at home.

What is your favorite thing to do to unwind or manage stress?

Music, dance and breathing. Sometimes I forget to breathe. We are in such a fast pace society and we move to that rhythm. When I play music, I get lost in the beat and I am free.

Your brand embraces a very strong, body- positive attitude. What kind of advice would you give your younger self, or younger women in general?

Stay positive and visualize. What you think about yourself is how others see you. The power of the mind is our greatest tool. I think its important for women to know they are great just the way they are. All the time you spend trying to fit in only takes you further from your true self. Smile at your self in the mirror, make yourself blush, and be the woman you want to be! You have the power.

Conversely, what is the best advice that you have ever received?

What makes you feel powerful?

Moving to the best music. When I sweat I feel sexy.

For anyone who is striving to reach personal health and fitness goals.What is a great 15 minute routine that can be done before work in the morning?

Dance. Turn on your favorite 5 songs and dance. I wake up to music. My body feels free and clear when I move my morning to beats and set my intention for the day!

What is your go-to 5-minute meal in the morning?

I always start my day with 10 gulps of cold water. Energy is used as your body sleeps, (After you wake up) your body is working and gets dehydrated! I love black coffee and either an egg white omelette or whole grain oats for some glucose energy for my workouts!

It can be a challenge to stay dedicated to fitness for many reasons. How do you stay focused in order to reach goals in fitness or in life?

I make plans and then execute them. We all have dreams, but without a plan they are just wishes. It is a combination of intention, passion, heart, and discipline to share with the world what your imagination and intuition speaks to.

Can you share with us the music that you are currently listening to? 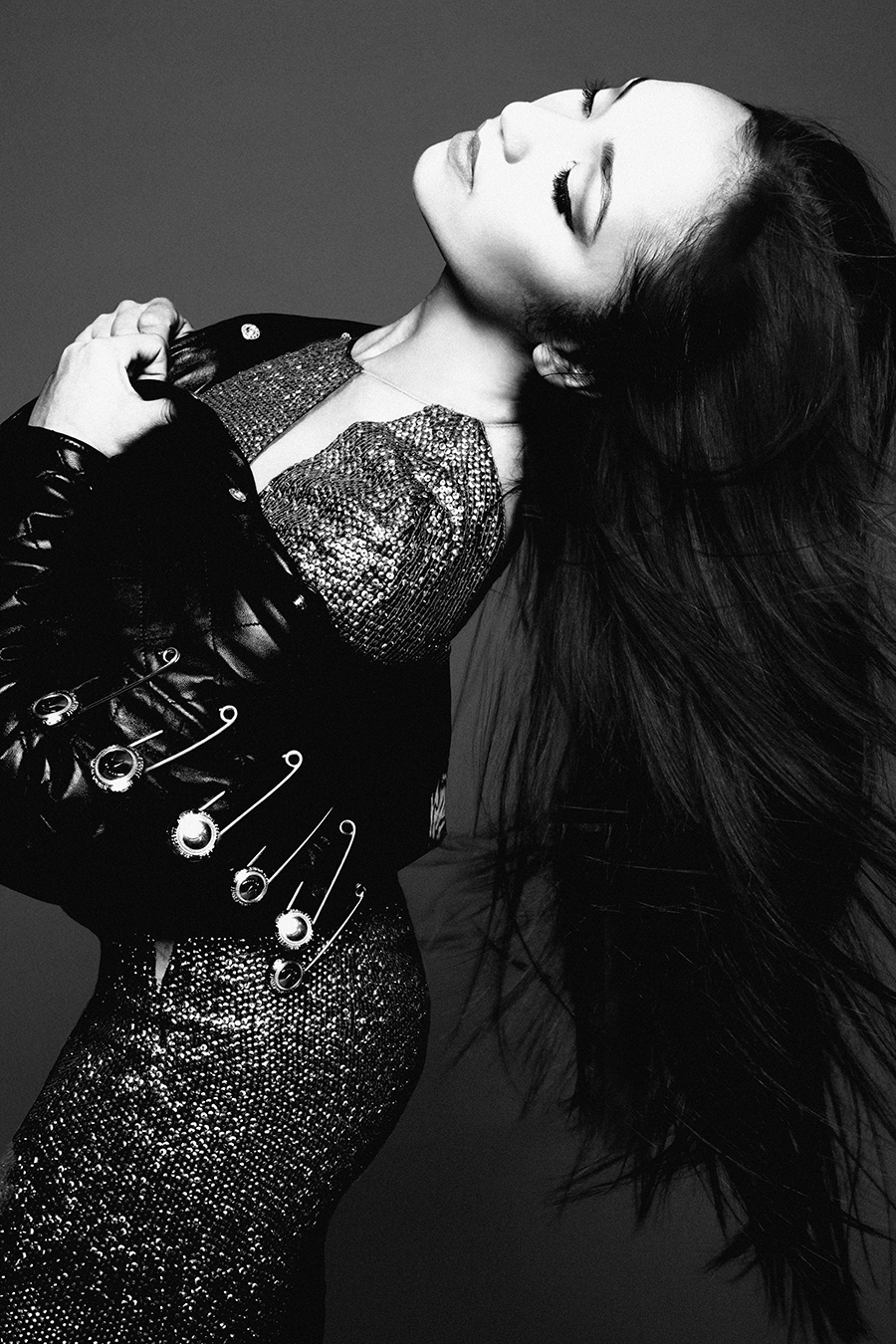